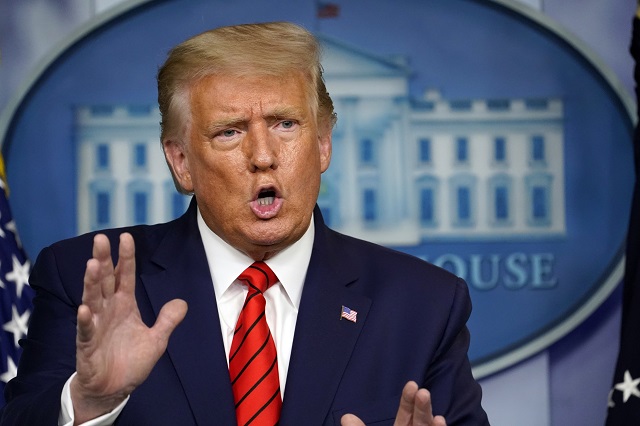 The United States has had enough of 19 years in Afghanistan, US President Donald Trump said on Wednesday, reiterating that US troops are leaving the country.

“We never had anything like it — and sacrificing American blood and treasure in endless foreign wars in countries that you’ve never even heard of. And they’re all coming back. You know that, right? I hope nobody objects,” Trump told his supporters at an election rally in Gastonia, in the battleground state of North Carolina.
Trump reiterated that the United States military in Afghanistan has played the role of police than army.

US troops are leaving Afghanistan under a deal with the Taliban signed in February.

The deal expects the international troops to be brought to zero by next May, conditions permitting, but Trump has said that all troops should leave Afghanistan by Christmas.

US envoy to NATO which currently has 12,000 troops in Afghanistan, however, has said that the conditions have not been met for a further reduction.

“Going forward, we will be looking at conditions on the ground to determine if there is a capability to draw down more troops, which we all would hope that conditions would allow us to do that. But certainly the conditions have not been met at this time,” NATO Ambassador Kay Bailey Hutchison told reporters during a virtual briefing.

She noted concerns about ongoing Taliban violence “in violation of the spirit of the agreement they made with the US, if not the letter of that agreement.”

“We are calling for a ceasefire, or a significant reduction in violence, which we have not seen,” Hutchison said. “And we call on the Taliban to reduce that violence, so that the conditions can be met, which is what all of us would like, so that Afghans can decide for themselves how they can live together in peace and be at peace with their neighbors and assure that no terrorist groups would be able to grow in their country and be a cancer on their country and be exported to NATO allies. That’s our goal. And we are going to support the Afghan process to achieve that goal.”