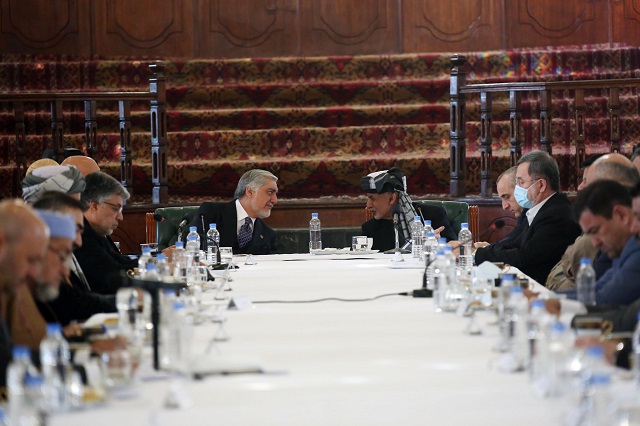 The first meeting of the leadership committee of Afghanistan’s High Council for National Reconciliation was held on Saturday, three days after negotiators announced breakthrough in peace talks.

Participants emphasized on unity among political leaders and groups for the success of peace talks and said that peace requires sacrifice, flexibility and patience.

They also called for acceleration of peace talks and ceasefire in the country.

President Ashraf Ghani said that the Taliban are a reality of the society, but they should also accept the realities of the society.

“Neither you nor we will surrender, the war has no winner, prolonging the war is easy, but the real courage is that we reach peace,” Ghani said.

“Respected Taliban, you should know that you won’t incur loss in ceasefire, Afghan people and government are committed to seriously negotiate with you, don’t be afraid of ceasefire,” Ghani said.

The president suggested that the republic system of governance should be preserved in the talks.

Meanwhile, Abdullah Abdullah, chairman of High Council for National Reconciliation, called for an agreement on a roadmap.

He said that peace doesn’t mean returning to the past. Abdullah said that prolonging of war guarantees survival of no one and it would lead to destruction of the country.

Former president Hamid Karzai said that anti-peace propaganda should be prevented and called for involvement of all political groups in the peace process.

Former vice president Yonus Qanooni said that the peace process should not be controlled by the two leading electoral teams alone as it is a national process.

He said that there should be one venue for making peace-related decisions.