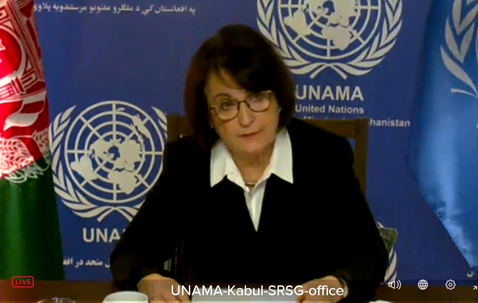 Addressing a special UN Security Council meeting on the situation in Afghanistan, Lyons said that in the past weeks, the war in Afghanistan has entered a new, deadlier, and more destructive
phase.

“Afghanistan is now at a dangerous turning point. Ahead lies either a genuine peace negotiation or a tragically intertwined set of crises,” Lyons said.

She said that over 1000 casualties were recorded just last month in Lashkagah, Herat and Kandahar cities.

“This is now a different kind of war, reminiscent of Syria recently or Sarajevo in the not-so-distant past. To attack urban areas is to knowingly inflict enormous harm and cause massive civilian casualties,” Lyons said.

She said: “Despite significant concessions for peace, we have seen a fifty percent increase in civilian casualties with the certainty of many more as the cities are attacked.”

The envoy said that further extension of travel ban exemption on Taliban must be predicated on real progress on peace.

“These next weeks will be decisive. But I am absolutely convinced that whatever happens on the battlefield—whether the Taliban take additional cities or whether the Government regains districts—the result will only prolong Afghanistan’s agony,” Lyons said.

Meanwhile, Afghan envoy Ghulam Mohammad Isaczai said that the Taliban continue to enjoy a “safe haven in and supply and logistic line extended to their war machine from Pakistan.”

“Graphic reports and video of Taliban fighters congregating close to the Durand Line to enter Afghanistan, fundraising events, transfer of dead bodies for mass burial, treatment of injured Taliban in Pakistani hospitals are emerging and are widely available,” he said.

“We urge Pakistan to help with removing and dismantling of Taliban sanctuaries and supply line and establish with us a joint monitoring and verification mechanism to make the fight against terrorism and international effort for peace, effective and credible.”

US representative said the Taliban must hear from the international community that “we will not accept a military takeover of Afghanistan or a return of the Taliban’s Islamic Emirate.”

“The Taliban will be isolated and an international pariah if they choose that path, which would most certainly push the country to further violence and destruction,” Jeffrey DeLaurentis said.