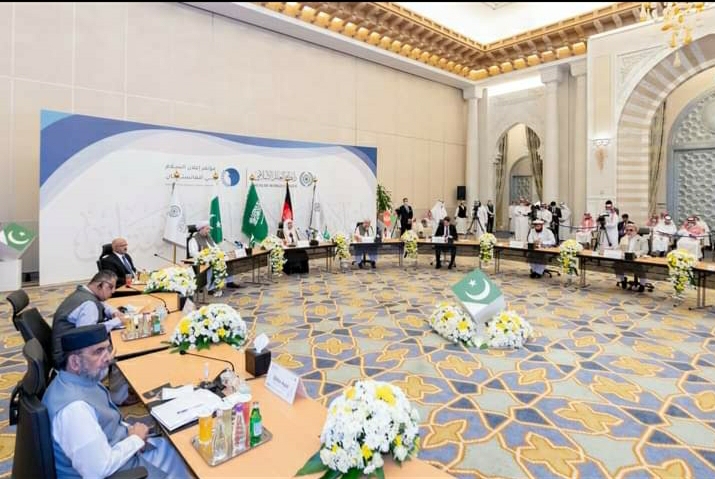 Senior Islamic scholars from Afghanistan and Pakistan signed on Thursday a declaration that calls for peace in Afghanistan.

The declaration was signed during a conference hosted by the Muslim World League (MWL) in the holy city of Makkah with the support of Saudi Arabia in the presence of MWL Secretary-General Muhammad Bin Abdul Karim Al-Issa.

The peace declaration supports negotiations among the warring parties and rejects acts of violence and extremism in all their forms and manifestations.

It seeks to address all political, social, economic and other issues through the spirit of joint action in order to stop the bloodshed and lead the Afghan people to the path of peace, reconciliation, stability and progress.

The declaration also emphasized that violence is not linked to any religion, nationality, civilization or race, adding that violence resulting from extremism and terrorism in all its forms and manifestations, including violence against civilians and suicide attacks is contrary to the basic principles of the Islamic faith.

The scholars highlighted the Saudi efforts for building bridges and uniting the ranks, which culminated in bringing the scholars of both sides on one platform.

In the opening session, Sheikh Al-Issa stressed that Saudi Arabia has always been keen on playing a key role in addressing the crisis in Afghanistan and the necessity to find a peaceful solution to it.

“There have been many initiatives, and voices that called to expedite reconciliation between the Afghan Muslim people and to get them out of the current impasse. This is a moral and ethical strength and a lively conscience, stemming from bitter conflicts that occurred in society, and it is an expression of the victory of the voice of reason and the silencing of bullets and explosions that burnt everything. As a government official I can say now that all barriers to reconciliation are removed,” Halimi said.

Pakistani minister Nurul Haq Qadir said that bringing peace and tranquility and promoting tolerance in society is one of the main goals of the right religion. He said: “Our religion teaches us harmony and unity and supports international cooperation and participation in all charitable works. Islam speaks of protecting the homeland, encourages development and prosperity, and commands the promotion of peace and the avoidance of riots.”

“The two countries have supported every step taken to bring security and peace to the entire region, especially in Afghanistan and worldwide, and I hope that the two brotherly countries will continue to play a dynamic and effective role in peace,” he said.

For his part, Afghanistan Ambassador to the Kingdom Ahmed Javed Mujadidi stressed that the importance of this conference lies in the fact that it is being held in the holiest place in the world, in the presence of a group of distinguished scholars, stressing that the Kingdom has never failed Afghanistan, and is still working and contributing to achieving security and peace in it.

Meanwhile, Afghan envoy to the Organization of Islamic Cooperation, Shafiq Samim, stressed that Saudi Arabia’s efforts and its leaders are supportive, fruitful, and successful in finding fundamental solutions to conflicts in the Islamic world.

He explained that Afghanistan has tasted the bitterness of wars over the past four decades, and has experienced events and battles that have destroyed the country, stressing that this conference is a serious attempt to search for ways to solve the Afghan problem through constructive dialogue and effective mediation.