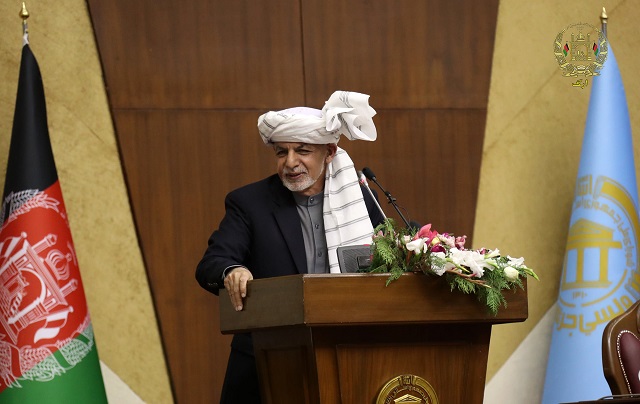 The Taliban will never win the war if they believe in “false narrative of conquering,” President Ashraf Ghani said on Wednesday.

The president said this in his speech in parliament where 23 ministerial nominees were introduced for confirmation.

Ghani said that US officials have assured the Afghan government that it remains committed to support Afghanistan.

He said that the US military support to Afghanistan continues and the recent airstrikes in Helmand was an example.

Ghani said that the United States has also assured that economic support will continue particularly for Afghan security forces.

He said that despite assurances given during Loya Jirga on release of Taliban prisoners, the group and its supporters continue violence.

“Ask Mulla Hebatullah where are you hiding? Why are you killing Afghans? You are saying that you won’t attack Americans, thank you, why are you attacking us?,” Ghani said.

He said that Taliban made Afghanistan faced by the world for Osama bin Laden and the current problem is because of their mistakes.

“Taliban should clearly assure Afghan people that they will detach themselves from terrorist groups,” Ghani said.