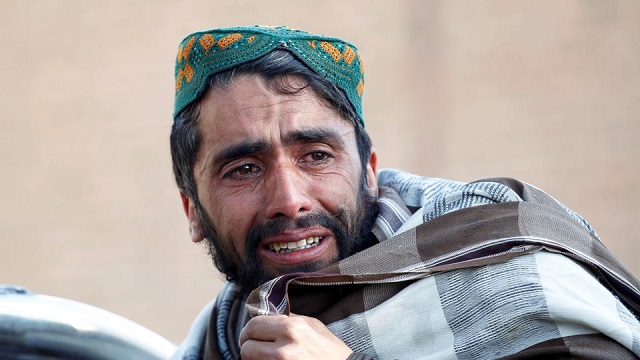 An Afghan man cries over the body of one of the victims of air strike in Surkhroad district of Nangarhar province, Afghanistan February 15, 2020. (Reuters)

The United Nations in a report on Tuesday noted a 30 percent in drop in the number of civilians killed or injured in the conflict in Afghanistan in the first nine months of 2020, compared to the same period last year, but the number has failed to slow since the start of intra-Afghan peace talks.

The report said 2,117 civilians died while 3,822 others were wounded in the violence between 1 January and 30 September, the lowest figure for a first nine months of a year since 2012.

According to the report, the Taliban and other anti-government militant groups were responsible for the majority of the civilian casualties during the first nine months – or 58 percent. The Taliban were responsible for 45 percent of civilian casualties, the report said, a decline of 32 percent compared to the same period last year. Deaths attributed to the Taliban, however, increased six percent.

The report also said that civilian casualties slightly increased between the start of intra-Afghan peace negotiations and 30 September to what they were in the weeks prior to the start of the talks.

“The peace talks will need some time to help deliver peace. But all parties can immediately prioritize discussions and take urgent, and frankly overdue, additional steps to stem the terrible harm to civilians,” said Deborah Lyons, the Secretary-General’s Special Representative for Afghanistan.

“New thinking and concrete action towards safeguarding civilian life will not only save thousands of families from suffering and grief but it can also help lessen recriminations and, instead, bolster confidence and trust among negotiators,” said Lyons, who is also head of UNAMA.