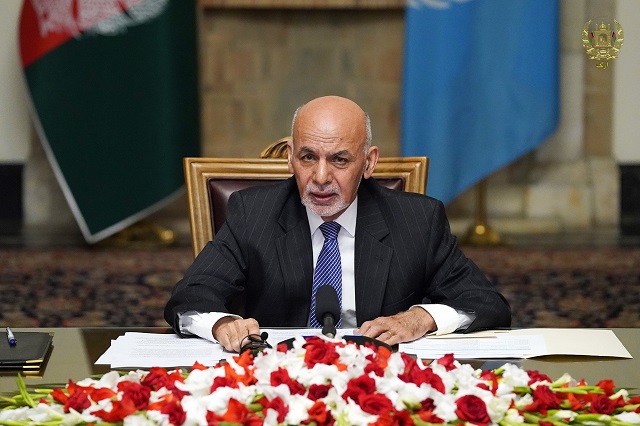 “Ignoring regional connectivity has been costly and we will avoid it at every cost,” Ghani said speaking from Kabul at the meeting on regional cooperation of the two-day conference hosted by Geneva.

He also said that a strong regional consensus is essential to create a sustainable peace.

“Cooperate with us to develop a regional framework to guarantee peace and political stability and contain and eliminate the interrelated threats of terrorist networks,” Ghani said.

He said that the violence that Afghan people suffer is beyond the endurance. “The window is short, please help take advantage of it,” he said.

The president also said that there has been an “enormous waste in misallocation of resources in the area of infrastructure.

Speaking at an event on sustainable peace building, Afghan Foreign Minister Haneef Atmar said that the end state of the peace process must be determined by the free will of the Afghan people and be acceptable to the international community.

“The first and essential step is to put an end to violence and hostilities, of which our people have not seen much unfortunately despite Taliban’s continued promises,” Atmar said.

First Lady Rula Ghani said that Afghanistan made over concessions by maintaining a defensive posture of its troops and by reluctantly releasing over 5,000 Taliban combatants from jails.

“We want peace, we dream peace, we cherish peace. But we will adhere to important principles embeded in our Constitution, the values of our Republic,” she said.

Afghan government’s chief negotiator, Masoom Stanekzai, said that “we must prevent at all cost the repeat of history and do not allow once again Afghanistan and the world for that matter to be trapped into the violence, to the vicious circle of a new game.”

Fawzia Koofi, a member of Afghan government’s negotiation team, said: “We all are in two different rooms with two different views, but it is possible for us to create a third room, a middle ground room, a room that is very difficult to decorate, a room that we have to really start from the scratch.”