NEWS
Home AFGHANISTAN US to keep two larger military bases in Afghanistan after going to 2,500 troops 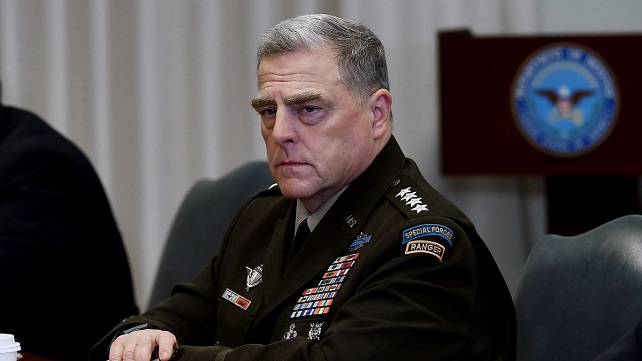 Chairman of US Joint Chiefs of Staff, Mark Milley.

The United States will keep two larger military bases in Afghanistan as it reduces the number of its troops in the country to 2,500 by mid-January, the top US general said on Wednesday.

Mark Milley, chairman of the US Joint Chiefs of Staff, who was speaking at an event hosted by Brookings Institution think tank, said that in addition to the two larger bases, the United States would also keep “several satellite bases.”

He said the US military will also continue its two core missions: aiding Afghan security forces who are locked in a grinding conflict with Taliban insurgents and carrying out counterterrorism operations against Islamic State and al Qaeda militants.

Milley did not disclose which bases in Afghanistan the US military would keep or which will be closed. He also declined to speculate about what President-elect Joe Biden may decide.

“What comes after that,that will be up to a new administration,” Milley said.

Under a peace deal with the Taliban, the United States is expected to fully withdraw its troops from Afghanistan by May, conditions permitting.

The Taliban is negotiating with the Afghan government and on Wednesday they announced an agreement on rules and procedures for the talks.

Milley said the United States had “achieved a modicum of success” in Afghanistan. He said that the idea of sitting down with Taliban representatives was “odious” to some people.”

“But that is in fact the most common way that insurgencies end, is through a power-sharing negotiated settlement,” he said.