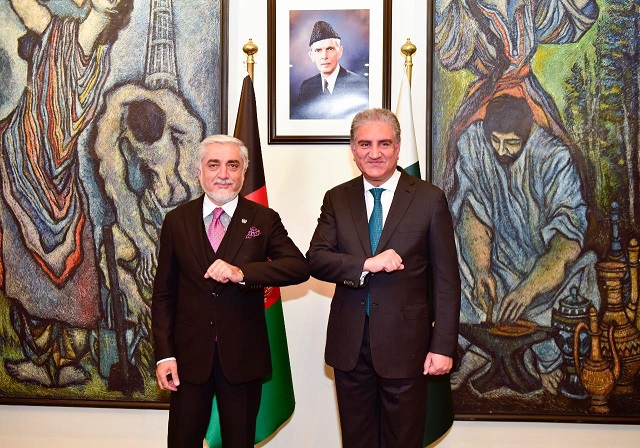 Abdullah met with Pakistan’s Foreign Minister Shah Mahmood Qureshi and is expected to meet with its prime minister and army chief and other officials.

“The Afghan peace process is of paramount importance for both and its success ensures socio-economic prosperity for all,” Qureshi said on Twitter. “Dr. Abdullah’s visit further strengthens the amity & fraternity between our countries.”

Before leaving for Islamabad, Abdullah said he would discuss peace efforts with high-level Pakistani officials, hoping the visit would open a new chapter in joint cooperation between the two countries in various field particularly lasting and dignified peace

Relations between Afghanistan and Pakistan have long been rocky as Kabul accuses Islamabad of backing Taliban. Islamabad denies that and in turn accuses Afghanistan of letting anti-Pakistan militants plot attacks from Afghan soil, which Kabul denies.

The US special representative for Afghanistan, Zalmay Khalilzad, said last week the United States and its allies were looking at an agreement between Afghanistan and Pakistan so that neither side’s territory would be used to attack the other.

Top US commander in Afghanistan, Miller, hands over command to McKenzie