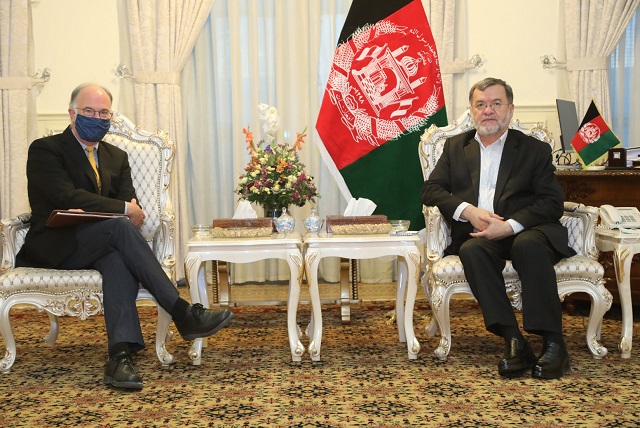 It comes as Afghan government and Taliban representatives have yet to finalize an agreement on rules for the negotiations, six weeks after they opened talks in Doha.

In a meeting with Afghan Second Vice President Sarwar Danish, US Charge d’Affaires Ross Wilson said that the Afghan government has had a logical approach and its concerns over increase in violence and slow progress in negotiations are understandable, according to a statement from the VP’s office.

He said that US will try to convince the Taliban through some countries to reduce violence.

The envoy also said that the Afghan political leaders including in the government and outside should act unitedly for supporting peace and preserving gains over the past two decades, the Constitution and its values.

Meanwhile, VP Danish said that the Taliban have not met the commitments they made in their deal with the United States and that pessimism is growing over the peace process.

He said that the Taliban and US had promised that with release of 5,000 prisoners, violence would be reduced and there would be no attacks in provincial capitals and district centers.

He also suggested that Taliban maintain ties with al Qaeda.

Referring to Daesh-claimed attacks, Danish suggested that such attacks are in fact carried out by the Taliban and Haqqani network.

He warned that new extremist movements would emerge and there would be more foreign interference if targeted killings continue.