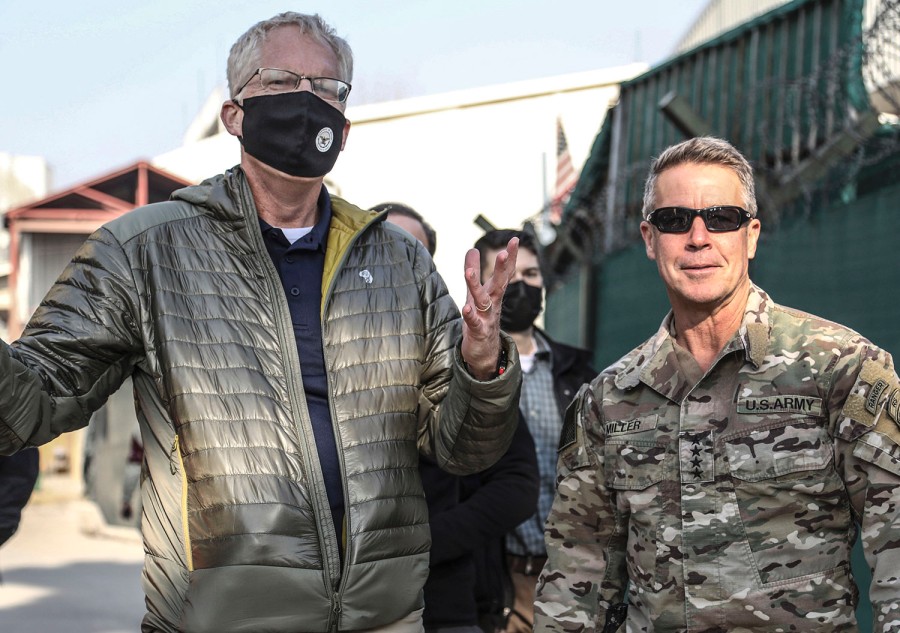 Special operations forces were the first US troops deployed in the war in Afghanistan nearly 20 years ago and likely will be the last troops to leave the country, US acting Defense Secretary Christopher Miller said after visiting in Afghanistan on Tuesday.

Miller traveled to Camp Morehead located south of Kabul, where US special operations forces train Afghan commandos, to hear from troops about the war from the ground.

“I went there on purpose because I’m going to get the real deal from these guys. And their smart-ass comments and their insights led me to the conclusion we’re in a good place,” Miller said.

During his visit to Afghanistan, Miller met with top US commander in the country Scott Miller, and Afghan President Ashraf Ghani to discuss the US commitment to the country’s security and the ongoing withdrawal of roughly 2,500 US troops by Jan. 15.

Miller said he had talked to Gen. Miller “extensively” about the work special operations troops will conduct in the next couple of months as all US forces are expected to leave the country by May 2021. They will likely be the last US forces in the country to continue counterterrorism operations against al-Qaida and support the Afghan security forces, he said.

Miller said he “always felt we made a huge strategic error by expanding the war” beyond special operations forces and then making them, including him, go to Iraq for the start of that war.

“I thought special operations and irregular warfare capability should have stayed in Afghanistan. [For] Iraq, the decision was made to do that. It should have been big Army, big Air Force…and I think we probably would have had a little different outcome in Afghanistan if we would have done — maintained what we were doing then and are doing now,” Miller told reporters as quoted by Stars and Stripes.

“I think we gave it our all, we sure did. I think there’s some cautionary strategic lessons that I don’t know whether the military will learn them or not,” he said without specifying what those lessons are.

Miller said he heard that “the Afghan security forces are a lot more capable than frankly what I came in thinking they were.” He added the United States can still inflict damage on the Taliban, if necessary.

“We’re supposed to be out by May 2021, y’all. That’s the agreement, right? This mission is really the one that’s going to get us to a place where we can depart with leaving behind a security capability that can survive whatever comes next,” he said.

Miller said that Ghani is in a “tough position but I think he holds the keys to — the war winding down, it’s hard you know.”

“It’s never easy. Very rarely do you have total victory like you did in World War II. Most of these insurgencies… gets a little rough towards the end and everybody has to come together and compromise,”