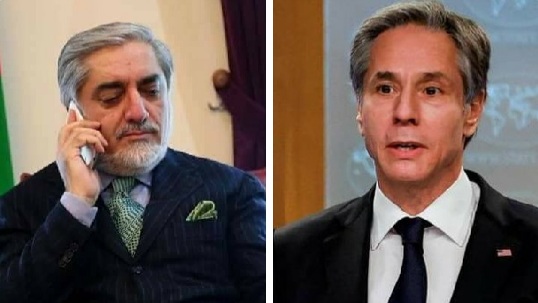 US Secretary of State Anthony Blinken on Saturday called for acceleration of Afghan peace process to achieve a comprehensive and lasting agreement, the office of Afghan reconciliation council chief Abdullah Abdullah said following a phone call between the two sides.

During the call, Blinken emphasized on political solution to the conflict in Afghanistan and called for violence to end.

Meanwhile, Abdullah said that the Afghan government wants the problem to be resolved through negotiations and achieve a comprehensive solution acceptable to all.

He called for international cooperation for acceleration of Afghan peace process.

The new US administration is reviewing its deal with Taliban as critics say the group is not living up to its commitment.

The review comes as May deadline for full withdrawal of foreign troops from Afghanistan is approaching.

“The United States is committed to consulting closely with our NATO allies and partners on the way forward in Afghanistan,” US President Joe Biden said at Munich Security Conference on Friday. “My administration strongly supports the diplomatic process that is underway and to bring an end to this war that is closing out 20 years.”