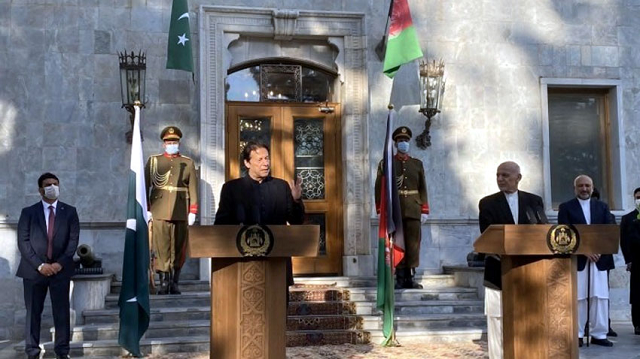 Pakistan’s Prime Minister Imran Khan on Thursday promised his government’s utmost efforts to reduce the level of violence in Afghanistan, as he made a maiden visit to Kabul.

“We have formed committees, the idea of committees is to ensure that these communications between us, between our security agencies, whenever you feel that somewhere Pakistan can help in reducing the violence, please let us know,” Khan said in a joint press conference with Afghan President Ashraf Ghani in Kabul. “We assure you that we will be doing our utmost to reduce this level of violence.”

Khan reminded that Pakistan played its role in getting the Taliban to talk to Americans and then the intra-Afghan dialogue “and we know with concern that despite the talks in Qatar, the level of violence is rising.”

“The whole objective of this visit is to build trust, to communicate more, to assure you that wherever you need our help, more than your expectations, we will be Insha Allah helping you,” Khan said.

He also expressed hope that trade and connectivity between the two countries will increase and for that “it is imperative that the level of violence goes down.”

Khan said that Pakistan was the country after Afghanistan, which is most interested in peace in Afghanistan and the reason is that the tribal areas of Pakistan were devastated by the war on terror.

Meanwhile, President Ashraf Ghani said that Afghan people want a comprehensive ceasefire “as soon as that would be feasible.”

He said that a comprehensive political settlement for an enduring peace “within the framework of our values, our Constitution and the Islamic Republic is the way to the future.”

According to president, embracing a constructive politics, a politics of engagement, an inclusive politics is the way to the future.