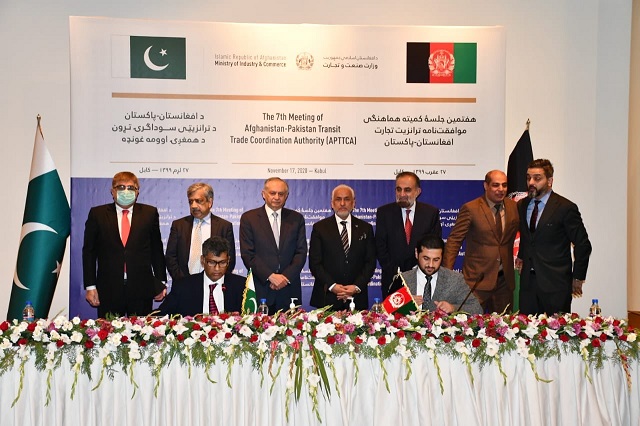 Afghanistan and Pakistan on Tuesday signed an agreement on customs assistance.

The agreement was signed during the seventh meeting of Afghanistan-Pakistan Transit Trade Cooperation Authority (APTTCA).

Pakistani prime minister’s adviser on commerce, Abdul Razak Dawood, who is visiting Kabul, has pledged that trade and transit problems will soon be resolved, according to Afghanistan’s chamber of commerce and investment.

He said that two working groups in Torkham and Spin Boldak crossings will be deployed to address the problems.

An economic corridor is also expected to be established between Kabul and Islamabad and the sides have begun discussions on it.

Abdul Karim Malikyar, deputy minister of industry and commerce, said that Afghanistan and Pakistan can create opportunities for increasing trade between the two countries and work in areas which benefit both.

Meanwhile, the Pakistani PM’s adviser said that the trade and transit problem in Ghulam Khan port has largely been resolved and scanning of goods has been reduced.

He invited the Afghan officials to visit Islamabad in December for a trade agreement.