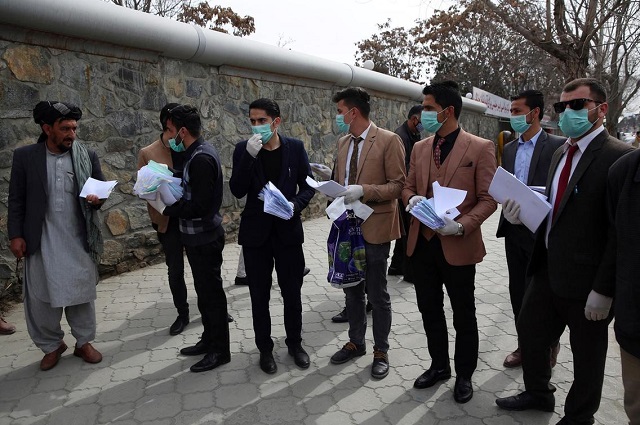 The Afghan government has made wearing a mask compulsory in its institutions in bid to stop a resurgence of the coronavirus pandemic.

Akmal Samsor, a spokesman for Public Health Ministry, said that the cabinet approved recommendation that wearing masks at work should become mandatory.

“Those who work at government institutions will not be allowed if they don’t have masks,” he said.

He added that mask-wearing was made compulsory in hospitals as well.

“In the first wave, one of the problems were facing was that a large percentage of health workers either in hospitals or their own clinics were infected,” Samsor said. “We don’t want to repeat the mistake.”

Afghanistan has registered 39,944 cases of coronavirus, including 66 over the past 24 hours.

In August, the country’s acting health minister, citing a survey, said that nearly a third of its population – or roughly 10 million people – had been infected with the coronavirus.

While Afghanistan has already passed its coronavirus infection peak, there are concerns that a second wave may hit as winter approaches.

Officials at Afghan-Japan special hospital for Covid-19 patients in Kabul said that visits have increased recently.

Zalmai Rishteen, head of the hospital, said that the level of oxygen use at the hospital was between 100 to 150 balloons over the last week, but 270-280 balloons were used in the past three days alone.