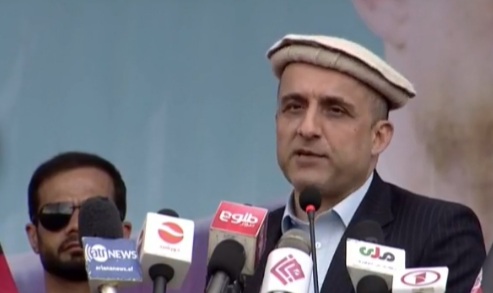 Addressing a gathering in Kabul, Saleh said that US special envoy Zalmay Khalilzad had discussed with them the agenda of the upcoming conference, which includes preserving values and agreeing to ceasefire.

He said that Taliban cannot bring back their Islamic Emirate and that the Afghan government has not lost war.

He said that the Taliban believe that agreeing to a ceasefire will make Afghan government less serious in negotiations, but it is a wrong perception.

According to Saleh, Taliban fear also from elections as they would get just less than 10 percent of votes.

He, however, suggested that the Taliban would still get share of power even if they lose the vote.

Saleh also said that releasing 5,000 Taliban prisoners that was part of its deal with the United States was a mistake as 85 percent of them returned to battle.

Meanwhile, President Ashraf Ghani in a video message said that the government was ready to hold early elections under the supervision of the United Nations.

He said that Afghans can create proposals better than outsiders do and that peace cannot come in haste.

Turkey conference on Afghan peace has been proposed by US which hopes that the meeting would finalize a peace agreement. The US has proposed an interim government as way forward.

Earlier, sources told 1TV that the conference would begin on 16 April.