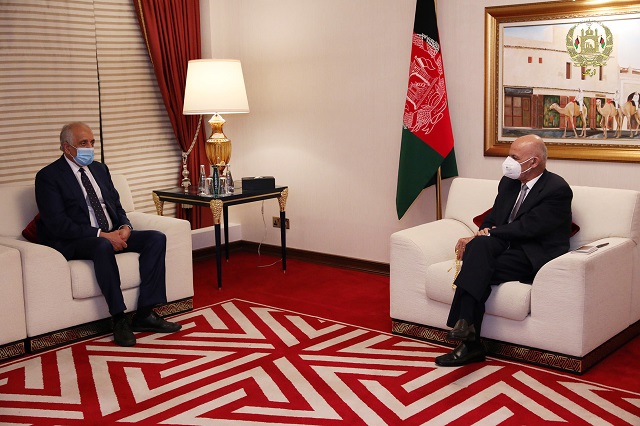 Afghans should not let the opportunity for peace to slip away, US Special Representative for Afghanistan Reconciliation Zalmay Khalilzad told President Ashraf Ghani as they met in Qatar on Monday.

Khalilzad said he and General Miller affirmed ongoing US support to Afghanistan, its partnership, and a peace process meant to produce a political settlement and an end to decades of war.

“I told the President Afghans should not let the opportunity for peace to slip away,” Khalilzad said on Twitter.

The president said that he supports the Islamic Republic negotiators doing their work as long as it takes, according to Khalilzad.

Khalilzad said that he was encouraged by what he heard from all sides, including the two teams’ commitment to peace.

The envoy also said that violence is too high. “We are pressing for a significant reduction in violence that will lead to a permanent and comprehensive ceasefire,” he said.

“A significant reduction in violence will save lives; increase trust; broaden support for peace; and help the negotiating teams make progress at a faster pace. This is what the Afghan people want. And the United States stands with them,” Khalilzad said.

Resolute Support commander, General Miller, representatives of US National Security Council and US Department of defense were also present at the meeting.

A statement from Afghan president’s office said that both sides emphasized on ceasefire and exchanged views on upcoming Geneva conference.

Khalilzad congratulated Ghani over beginning of peace talks between the Afghan government and the Taliban. He expressed concern over rise in violence and reaffirmed US support to Afghanistan, according to the statement.