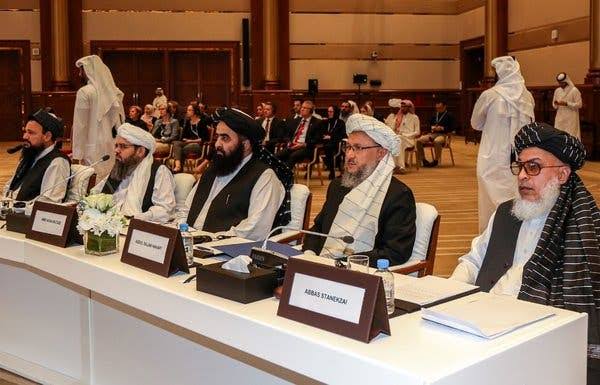 The Taliban plan to present a written peace proposal at the negotiating table next month, Reuters reported.

“The peace talks and process will be accelerated in the coming days … and they are expected to enter an important stage, naturally it will be about peace plans,” Taliban spokesperson Zabihullah Mujahid told Reuters on Monday.

“Possibly it will take a month to reach that stage when both sides will share their written peace plan,” he said, adding that the latest round of talks were at a critical juncture.

“Although we (Taliban) have the upper hand on the battlefield, we are very serious about talks and dialogue.”

Intra-Afghan peace talks began in September last year, but there has been little progress.

Fighting escalated across Afghanistan after foreign troops began last phase of withdrawal from the country in May, with the Taliban seizing dozens of districts.

“We urge the sides to engage in serious negotiations to determine a political roadmap for Afghanistan’s future that leads to a just and durable settlement,” a spokesperson for the US State Department said.

“The world will not accept the imposition by force of a government in Afghanistan,” the official added. “Legitimacy and assistance for any Afghan government can only be possible if that government has a basic respect for human rights.”

“It is difficult to anticipate that the Taliban will provide us with their written document of a peace plan in a month but let’s be positive. We hope they present (it) so as to understand what they want,” said Anwari.